I gave blood today. I was worried since last time I gave blood I nearly passed out, so this time I made sure to eat a big breakfast (which works out well with my trying-to-eat-a-big-breakfast experiment). Apparently it worked, I felt fine.

I was the guinea pig for the girl who took my blood, seemed like it was her first time, she had a woman guiding her through the procedure. The heavyset girl was nervous, flushed and sweating, and continuously getting flustered and either freezing up or doing things in the wrong order. Luckily the older woman was there to correct her, or probably something horrible would have happened to me, the girl seemed especially confused about what order to undo clamps.

Excerpt from the scene:

[Girl is standing there, frozen]

Woman: What is it?

Girl: um... [gestures downward, to what I assume is a puddle of my blood on the carpeted floor]

Woman: You must have clamped that tube in the wrong spot. [rubs blood into the carpet with her shoe] It's ok, doesn't look like you spilled too much.

Since she was a novice, setup took a lot longer, as did breakdown. Which is annoying when you're waiting for them to take the needle out of your arm. The whole process took about an hour and 15 minutes. The last two times I gave blood, it was more like 40 minutes. I know people have to learn sometime, but there is a great deal to be said for efficiency.

It got me thinking about giving blood.

One issue I have is, they don't give you much for it. Yes, they sometimes have swag, like a mug or whatever (this time they gave out a coupon for a free personal pizza at Unos, which is about the unhealthiest food you can buy - no wonder americans are so obese, when a *HEALTH* organization like the Red Cross is giving out coupons for 2400-calorie meals), but they *could* give you something much more valuable.

Like if they did a free cholesterol screening. I've seen the machines, they are about the size of the hemoglobin machines, I bet they could do a combined one that does both. THAT would be valuable.

I always ask for my vitals, but they are ill-prepared for that. This time, I got my vitals messily scrawled on a bandage wrapper. Not only that, but she only wrote blood pressure and heartrate, I had to ask again to get the hemoglobin number. She seemed annoyed that I was asking for information. And I saw her punch in about 6 or 7 values, and she only gave me 3 (4 if you count BP as two fields) so who knows what other data she had that she didn't share? 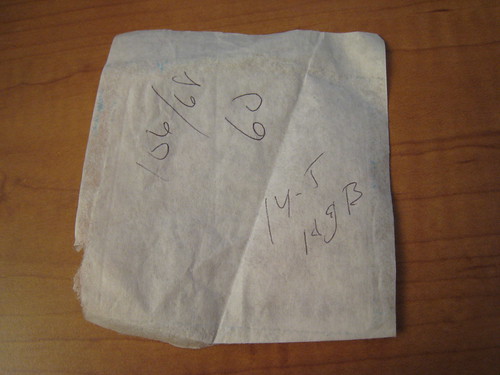 Rendered with my chart-drawing script: Now that I think about it, she took my temp, but didn't give me that value...

Sigh, selfish medical people, never want to share data. Like gollum with the ring, they are... "Yessss, my precioussss data, preciousssss..."


But anyway, my point is that, how about they give you a free cholesterol test if you give blood?

And maybe also have a trained nutritionist on hand to give free advice while you are in the recovery area? Instead of walking out with a coupon for a free bucket of lard, maybe people could walk out with some useful data and advice...

Also, this time I gave blood, it was the Red Cross, the last two times it was a local hospital that came to Staples. The hospital had better giveaways (the steel-lined plastic mug I got last time is quite nice, I use it every day) and were friendlier. Maybe it was because the girl was so flustered, and the woman was busy helping the girl, but they barely spoke to me at all.

Another thing they could do while giving blood, and for medicine in general -- one thing that works as a great pain/discomfort suppressor is distraction. I read an article recently about a doctor who decided, rather than sedate kids to calm them down, he gave them his iPhone with a video playing on it to look at. Seems simple, but apparently most places just drug kids to quiet them down.

It would have been nice if they'd had a TV with the news or something on it while people donated blood. They did have a really crappy boombox in the corner, crackling out some tunes, so that was better than nothing, but probably the more senses are distracted, the better.
Tags: data, medical
Subscribe
Comments for this post were disabled by the author